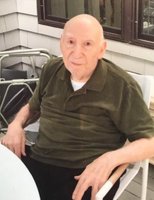 Norik N. Tatevossian passed away peacefully at Forest Hills Hospital on September 22, 2020. He was 94 years old and lived in Forest Hills, Queens. Born in Tehran, Iran, our beloved Norik was the son of Levon Tatevossian and Hasmik (Ferahian) Tatevossian. He graduated from Mandegar Alborz High School in Tehran in 1943. The family immigrated to the United States in 1944, settling in Watertown, Massachusetts. In 1950 Norik graduated from Purdue University with a bachelor of science degree in civil engineering. In the early 1950s he took additional engineering classes at Columbia University. The family relocated to New York in 1949. In April 1952 Norik married Rita (Lulu) Galstian, daughter of Hrand Galstian and Guenof (Howsepian) Galstian. The couple had met in Tehran in the late-1930s. They had two sons, Levon and Armand. In 1952-54 Norik was a second lieutenant (later promoted to first lieutenant) in the U.S. Army (Corps of Engineers). The second half of his two-year term was spent in Korea, where he was deployed soon after the July 1953 signing of the Korean Armistice Agreement. As an accomplished civil engineer (specializing in highways and bridges) over a sixty-year career Norik was a highly-valued colleague at several engineering-design firms in New York. In 1990 he joined the New York State Department of Transportation (Region 11). At his 2009 retirement from the DOT Norik was the director of the region’s Structures Group. After completing his New York State tenure he worked part-time for a private-sector engineering firm from 2009-13. Norik was a person of many interests. He loved classical music (Mozart especially) and was an avid reader of books on classical music and history. He was deeply devoted to his family and to a wonderful and wide circle of friends. The Iranian-Armenian community in the New York area, of which he and his family were a part of for seventy years, was very special to him. He was blessed that his love and engagement were returned back to him over and over. He also shared many deep friendships with his colleagues from the NY State DOT. Norik was predeceased by his beloved wife Lulu, who passed away in February 2018. He is survived by his son Levon and his partner Sylvie Merian, his son Armand, his nephew Paul Asdourian (wife Nina and children), his nephew Mark Asdourian (wife Charlene and children), his nephew Glenn Asdourian, his nephew Rafik Aftandilian (and children), his nephew Vahe Aftandilian (and daughter), his cousin Kathy (Avanessians) Martinez (husband Wayne and children), his cousin Armen Avanessians (wife Janette and children), his cousin Dianna (Keshishian) Patella (husband Lou and children), and many other cherished relatives. He is also survived by Ella Sargsyan, Norik and Lulu’s compassionate caregiver for the last several years, and her husband Robert. Norik’s sister Diana passed away in 2007. Due to the pandemic there will be no church service. On Tuesday, September 29th Rev. Fr. Mesrob Lakissian, pastor of St. Illuminator’s Armenian Apostolic Cathedral, will offer a service for dear Norik at the cemetery prior to the interment. The service will be private. In lieu of flowers, those who wish to make a donation in Norik’s memory can donate to: St. Illuminator’s Armenian Apostolic Cathedral 221 East 27th Street, New York, NY 10016 Armenian Prelacy 138 East 39th Street, New York, NY 10016 Armenian Society 39-03 Little Neck Parkway, Little Neck, NY 11363